So it's that time again, yet another teatox? Remember when I tried the HealthyMeTea? (Probably not) It's a teatox tea from the Aussie branch "SkinnyMeTea", although YourTea also is a Aussie brand I thought after so many positive reviews about it, I thought I would give it a go.

Also the fact hey had a 20% discount, kind of lured me into the teatox craze once again.

It's a tea blend made by the company "Your Tea", basically a group of friends that made their own teas, saw the results it gave and thought of sharing it with the world - read that off the box I got, but the thought is sweet~ I've heard both high and low about the "Tinytea" their teatox to aid weightloss and de-bloating of your stomach, help restore your clean glowy skin as well; sounds pretty win-win to most of us girls out there.

It's a herbal Chinese blend consistent of :

That little added label "contains gluten" is weird, I bought the 28-day Gluten Free Tinytea package, but I won't question it if they say it's gluten free...maybe.

Anyways! In the SkinnyMeTea, as well as many other "teatox" teas, there's a Morning/day tea &  Evening/Goodnight tea: where in most cases the latter one contains laxative herbs perhaps such as
- Senna,

Senna leaves are used in countless of "slimming herbal" teas, mainly because of the laxative effect. It can be very strong and hurt your bowels a lot, so I really hope you guys will be careful! Always be careful with those kinds of products, if you don't care and just go with it you might end up having to rely on the tea to actually..poop. Your bowels won't be able to do it properly by itself, it can be very dangerous!

Not to scare you off by teatoxes cause you never know "how much" of senna leaves they actually use but, just be careful like with most things online or "slimming" products ^0^ / 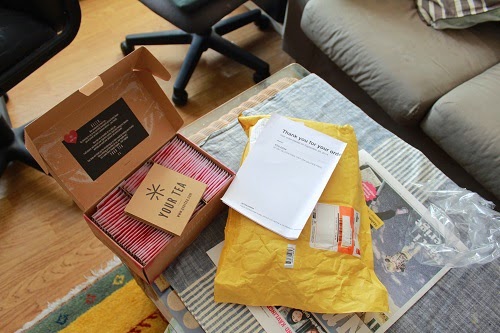 I was gladly surprised at how fast this company ships their products out, I ordered the 28D GL package on the 24th of September and it was by my door on the 29th (Sept) so basically 5 days; I placed the order at night so it got shipped out the day after. So glad! Great service. 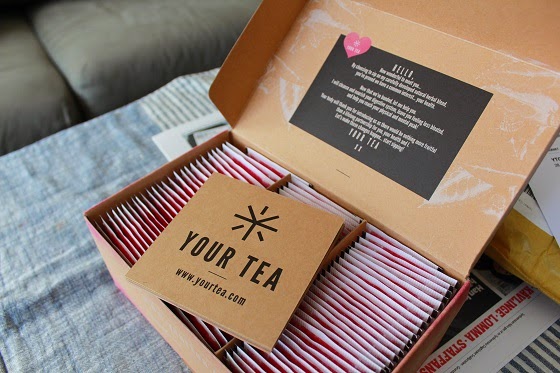 About the box, I love the design. Compared to other companies that just put it in reseal-able bags; be it loose tea leafs, I think this method is much nicer. It looks more professional and clean. Comparing to my SkinnyMeTea experience with the loose tea leafs in a bag it was very troublesome to measure everyday to make sure I had enough for a cup - for the next 14 days. It was just a mess that didn't taste good at all, actually on the first try I gagged so bad I - TMI - threw up in my cup.

I loved how the scent of herbs and I dunno, calmness just oozed out of the box when I opened it. I love opening it just to get a sniff of that scent. (sounding like a lunatic, oops)

I love my tea 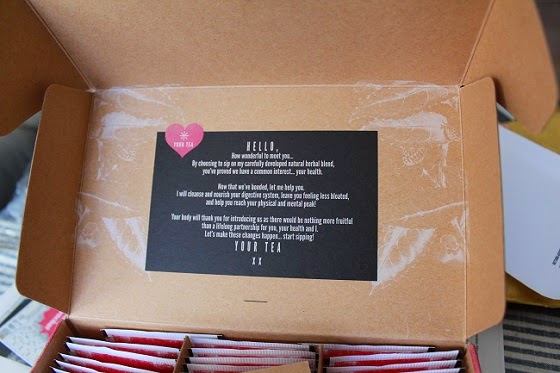 I've had a few cups so far, and I would say I enjoy the taste. I wasn't really skeptical on the taste since most of the reviews I stumbled upon was by girls, most likely non-herbal/traditional tea drinking ones, I bet a Chinese wouldn't even think twice about the flavor since they're Chinese herbal blends + they're tea drinkers.

Over all good first impression! I can't wait to try it out more and see what happens, hopefully my skin and body will welcome it's goodness if not, then..erm, it was the most expensive tea I've ever had. HAHA

Here's the video edition of my FIRST impression (unwrapping and everything)

Hey there! Back again with a review of one of my old favorites Stellar Grey

But in green this time around, I thought about getting green lenses (while I was still living in Thailand) So since I loved the Stellar Grey 3 Tones I found out they didn't sell it under the "thai name" Stellar but the Puffy name instead.

I bought them in Victory Monument if you wanna know exactly where keep reading!

The price I payed was 100Baht (20DKK, less than $4) so I'm very happy I bought them in Bangkok cause the quality is just the same as in the online stores (they get shipments from China and Korea) also, if you didn't know Thai teens ranging from early tweenies to late 20's (even past that) wear circle lenses, it's 100% common and they buy them at street vendors. It's safe, but if you're uncertain just ask the seller.

Here you can see the enlargement, I think they are around 14.5 or just 14mm they're not as big as I thought they were, which is great cause that wasn't what I was looking for. So if you're going for enlargement, go with the Mimi series instead. 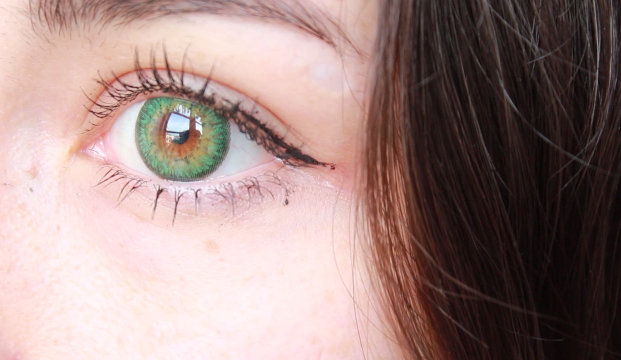 I've always loved this pattern, the gradient design just makes it really flattering and natural looking on the eye, so I couldn't help myself and not give this a 5/5 rating. Just look at it, I for once think my eye looks great! /HAHA

On a side note, the color is pretty strong so when you look from side to side, it's easy to see the color, like you can see it in the corners, but there's no uncomfortable feeling about wearing these lenses at all. Even though they're "thick" they are comfortable on the eye, doesn't dry mine out even after 8 hours.

These lenses fit perfectly for dark eyes, giving a nice pop, since the color is strong I think it would look (kind of) natural on real dark eyes, since a dark color would make the iris gap look more realistic then my own eye color.

If you wanna see how it looks on both eyes (with both of them in) check out my video review here.

You can buy this lens on Uniqso and on Geocoloredlenses, the names are down below! 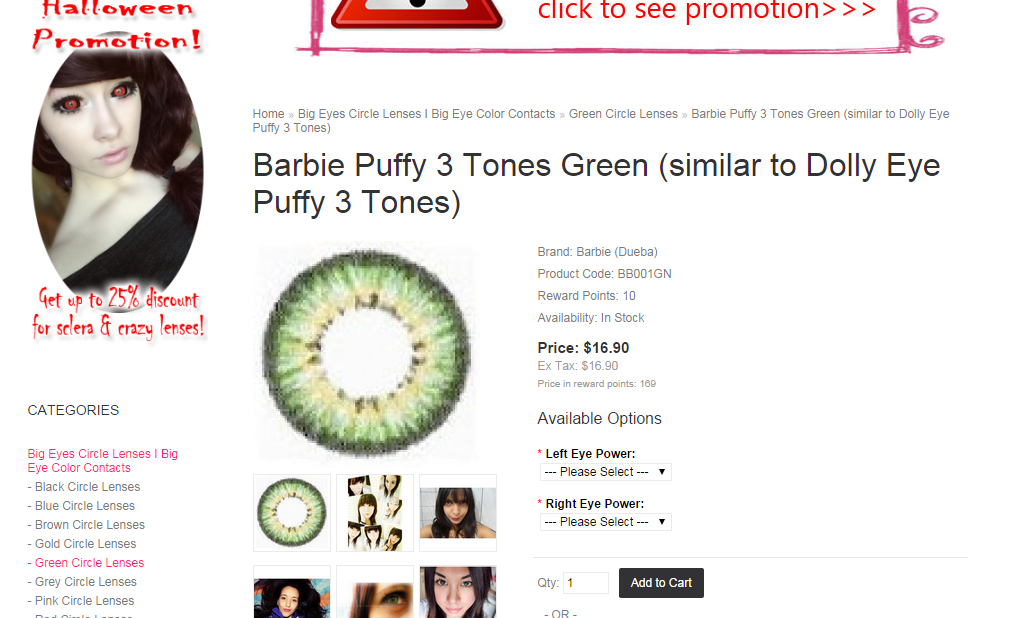 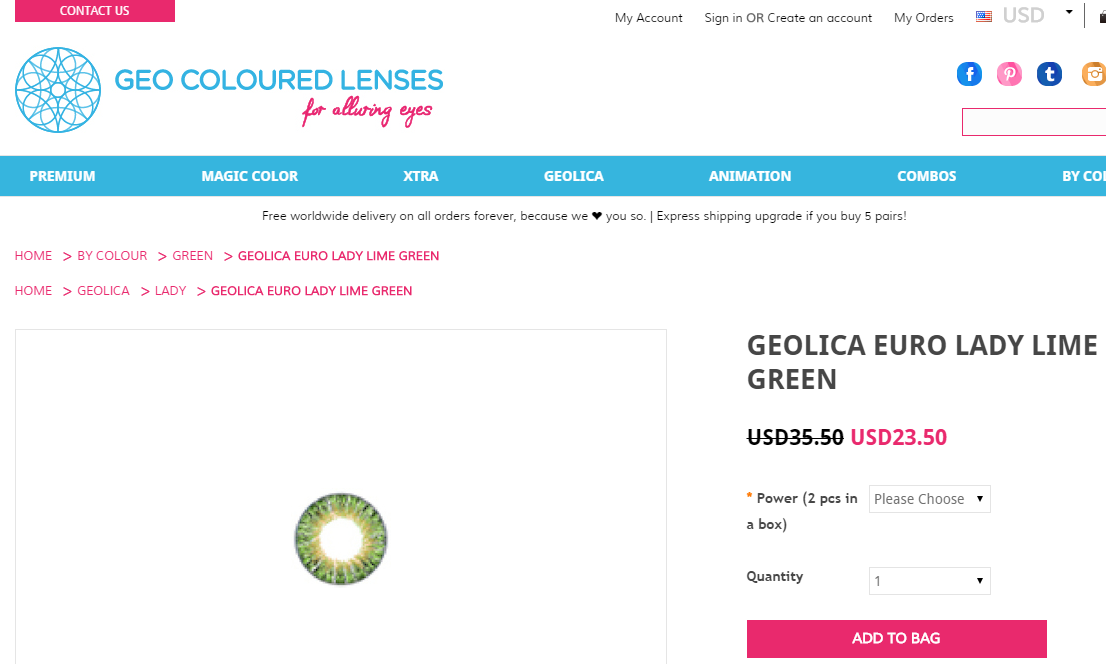 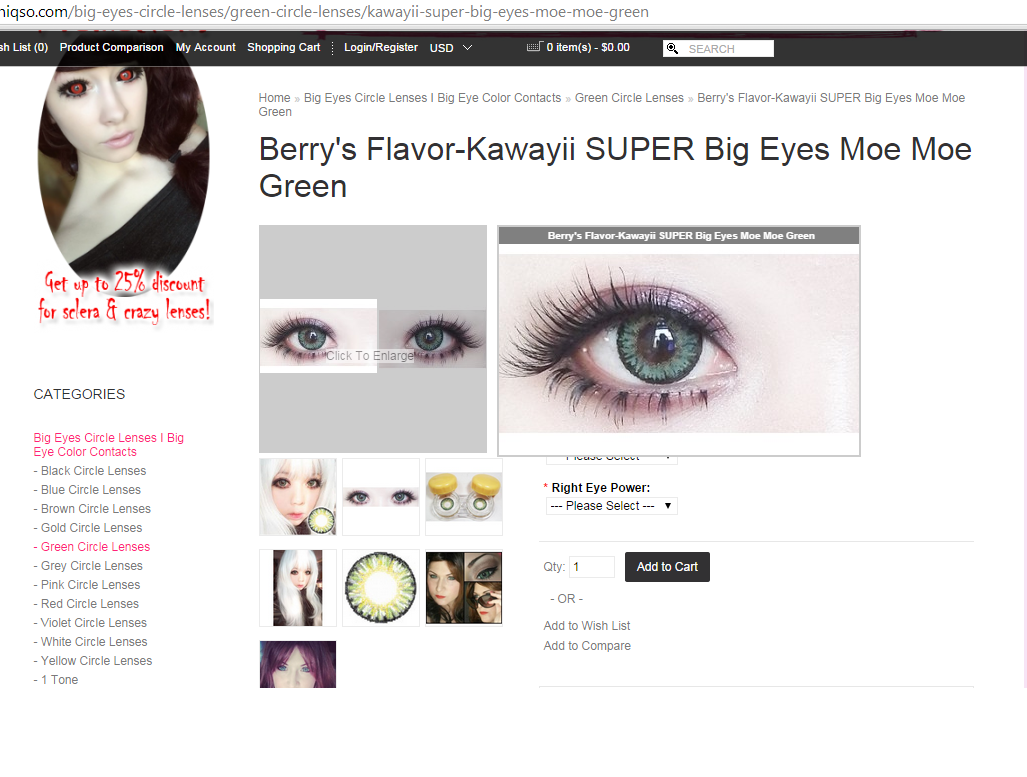 Thank you for reading!

I bought this wig from a third owner, I can’t explain how their customer service or shipping goes but, I’m sure you can look up other reviews on that point :D It was bought originally from a friend who then sold it to the girl I bought it from, both sold it because they didn’t think the wig suited them. Such a shame, I think it’s AMAZING. Let me break it down; when I got it, it had only been tried twice, but I received it in a sad condition, they hadn't combed it! So all the luscious curls were more stiff; so just give it a few combs and it’ll look fabulous.

Prior to this I have been waiting to own this wig for over 4 months, I’m dead serious I've just been drooling over this for so long…But, hey it’s fucking awesome.

The quality was a big surprise, it’s probably one of the best wigs I’ve owned (apart from 2 cosplay wigs I had) only sad part is that the fringe is a little uneven and I can’t seem to even it out better, but the reason lies in the pressed shape it has been in, inside of the small bag it was in. A quick wash n dry would solve this problem easily but I’m lazy :B … Though washing a wig is really easy. HA 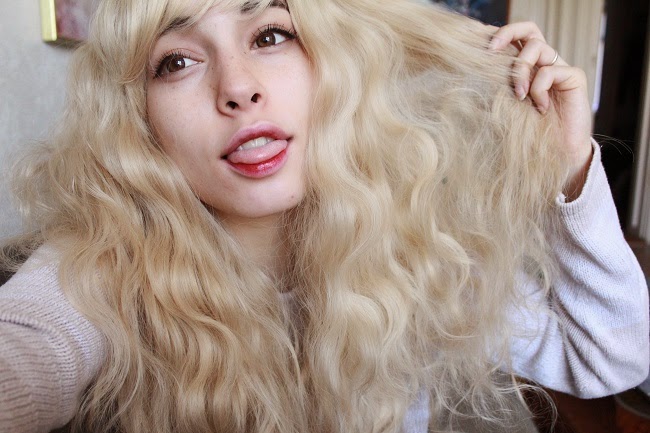 The length caught me off guard, I thought it would be longer based off the stock photo but, even so I think it has good length but, I would consider buying a longer one in the future, just because I have a thing for REALLY long hair.

The volume though, we gotta talk about the volume, this wig has seriously NO limit at how big it can be, it’s fantastic! A little combing and some hairspray, boom you got yourself fab hair for days. (Can you tell how much I love it or no?...)

I demonstrated the volume potential in the video review that's at the bottom of this post so just read a little more or go straight to the video is up to you! :'D 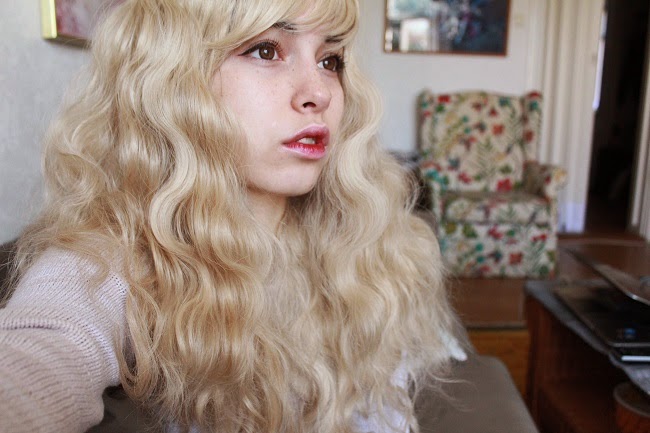 Right now I have no cons about this product/wig, I think it’s a great investment and every penny well spent. I would have bought it from the site as soon as my paycheck went through but, I couldn’t help myself, oops.

If you’re looking for a dolly/sweet/GREAT wig in this style, I recommend it to you, also Lockshop has it in 3-4 other colors that are worth to mention. Also they have other styles ranging from cosplay to sweet/gothic Lolita and fashion wigs in general. It’s definitely worth a look! 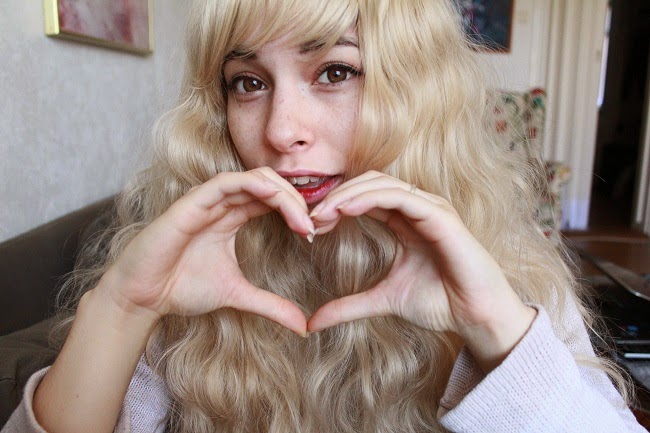 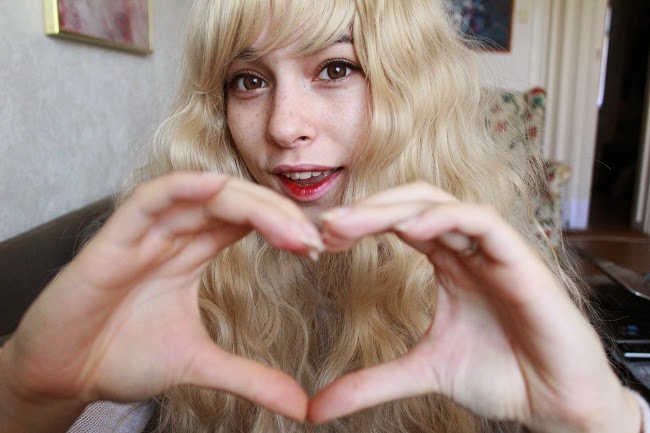 Check out the video review below

How to get glowy skin in no time!

The ”Fast-Fix to glowy skin” in the morning!

This facial mask is easy, cheap and SIMPLE; I gotta emphasize the simple cause hey it’s just yogurt.

I personally use this face mask twice a week, it makes my face look clearer, smoother and brighter, so I over all love this cheap facial treat when I have a short amount of time to give my skin a fix :D

I’ve broken the steps down for you like so:

1)     Make sure to have a clean face, and hands. It’s always important to have clean hands (and face of course) before applying/massaging your face, you don’t want to put bacteria from your hands into your skin/pores after all.

2)     Now take your yogurt and a (clean) spoon, just take a little scoop to begin with and smear it on your face. Of course this step is easier if you use your fingers, that’s also why you gotta have clean fingers. If your first spoonful doesn’t cover your whole face (refer to the picture below) clean the spoon and repeat this step J 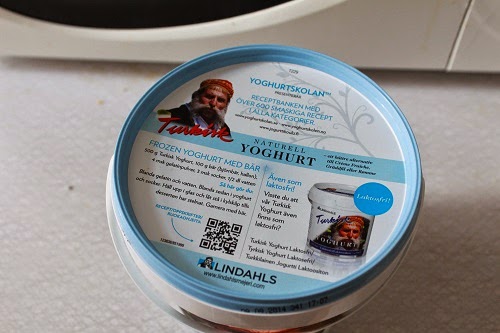 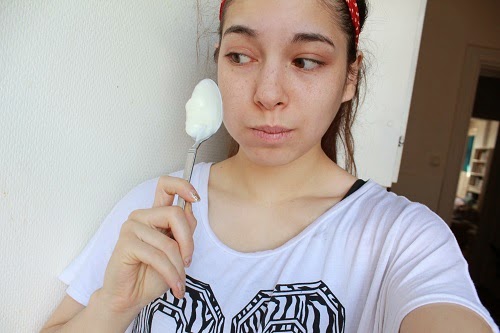 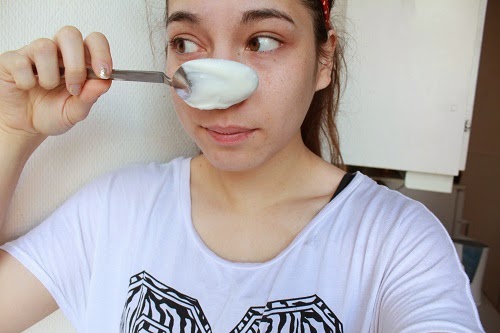 3)     Have your face covered? Now don’t have too much on so it runs down your face, that’s no fun dripping all over the place. After this, just let it dry, it’ll take about 10-15 depending on how thick you made the layer now just sit back, eat your breakfast, do homework or pack your bag ready for work/school.  (Or take selfies. YOLO) 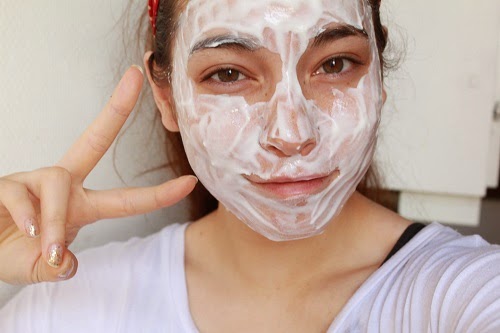 4)     Is it now dry? It’s okay if some spots are a bit wet even if the most of it is dry; use some luke/warm water and rinse it off in the sink or in the shower.

5)     Proceed with any moisturizer you use in the morning/ before applying your makeup. If you even need it after this step! :D Pat your skin softly, it feels nice. Now you’re done!

Haku
Welcome to the blog hub of Hurricaen Haku! I'm a 20-something Thai-Danish girl with a lovely boyfriend. The blog is my let out for all my little hobbies and loves, kpop, fashion, Youtube, makeup and skincare. I'm a weird awkward turtle trying to be fit and look pretty :D Do stay around~